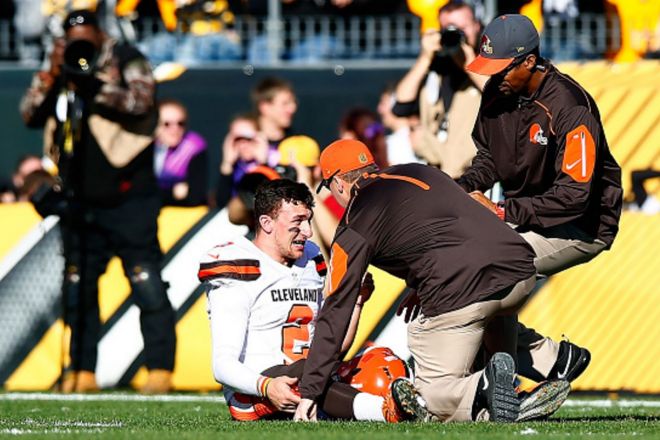 It’s nearly impossible to catch all the great moments from every NFL Sunday. We’re here to help. Below we highlight some of the best (and worst) moments from Week 10.

Dancing with the Back-Up

Arizona QB Drew Stanton shows off his Jacksonesque dancing chops on this 48 yard TD run from Andre Ellington. The fluidity of how he moves is… really something. Look at it this way, Drew: if the Cards ever give you a raw deal, you’d make a fantastic 3rd-base coach.

The Chicago Bears appear to be in the midst of turning their unfortunate-to-date season around, winning two big games back-to-back. I mean, just look at the blocking on this screen play to Jeremy Langford, AKA Not-Matt Forte. The Bears themselves can’t even believe their good fortunes!

Some wide receivers have such a chip on their shoulders, you know? Like Arizona Cardinals WR Michael Floyd, who feels the need to make things more challenging by only catching touchdowns in mid-Moonwalk.

Hanging Out with the Team

Q: What do you get when you cross Chip Kelly with Gene Simmons, and an iguana?
A: Minnesota Vikings DT Linval Joseph

Week 10 saw the Raiders get the snot beat out of them by the Minnesota Vikings, including this bone-shattering hit on rookie WR Amari Cooper. This is actually the second rocking Cooper’s received in as many weeks. He keeps this up, Cooper will be the youngest player in NFL history to need someone else to feed him.

As Seen on TV

It’s so gratifying to see professional athletes that work hard enjoy their successes on the field. What’s that, you say? The Tennessee Titans are 2-7? Well… it must’ve been difficult to get that dance exactly right. That’s hard work too, right?

This is the most brutal facemask I’ve ever seen. I like how the commentators are all tongue-in-cheek about his contact lenses, and less worried about whether he’ll be able to blink ever again. Way to prioritize the joke over possible neurological damage.

Leaping Over Hurdles in Life

My favorite part of this little mix-up is how S Johnson Bademosi is looking around after being corrected, as though he’s asking his teammates “Hey, do you think the camera caught that?”