There are many different ways to express yourself in your fantasy football league. Perhaps you are the guy with the awesome avatar. Maybe you talk the best smack on the message board. But the surefire way to be the envy of your friends is to have an amazing fantasy football team name. Hell, it may even turn your season around!

The movie Anchorman produced dozens of quotables that you and your circle of friends, no doubt, still use today. Below, we’ll help you recycle the best ones to use as your fantasy team name. Sure, some will need tweaking to make them fantasy football relevant, but you’re up to the task. Now, on to the names.

1. Dr. Kenneth Noisewater: Brian Fantana (Paul Rudd) has names for his testicles. Apparently his right went to medical school. Perhaps your friends won’t easily recognize this reference which will give you the chance to explain it. You win already.

2. Polite and Rarely Late: How Brick describes himself at the beginning of the movie. He also goes on to say that later in life a doctor tells him that he has an IQ of 48, and that he’s what some people call “mentally retarded.”

3. By the Beard of Zeus: What Ron says when he sees Veronica Corningstone for the first time at the ratings celebration party. If you really love the quote, why not wear it on your chest for all the world to see?

4. Kind of a Big Deal: One of the most quoted lines in the entire movie. How Ron describes himself to Veronica when she says she didn’t know who he was. Through all of his ramblings to try and impress Veronica, while the timing was bad, the statement was true. In San Diego, Ron was a pretty big deal.

5. Smells of Rich Mahogany: When Ron is stumbling through his words trying to impress Veronica, he starts rattling off that he has “many leather bound books” and his apartment “smells of rich mahogany.” All this time, we thought he lived in a house.

6. The Whole Wheel of Cheese: When Ron is talking to Baxter, he interprets Baxter’s barking to say that he pooped in the fridge and that he ate…the whole wheel of cheese.

8. Cat Fashion Show: Though she felt it beneath her, Veronica’s first story at the network was to cover a cat fashion show.

9. Sex Panther: As Brian tells us, it’s by Odeon, it’s illegal in nine countries, and it’s made with bits of real panther, so you know it’s good.

10. 60% of the time, it works every time: When describing Sex Panther, Brian brags as to its math boggling effectiveness. We’d suggest going with “60% of the time, I win every time,” as your team name, but that’s just us and we’re not here to tell you what to do. Who are we, your mother?

Not enough time to commit to a full season? Tired of seeing your team lose because of injuries? Try daily fantasy football on FanDuel and DraftKings and create a new team every week to win huge cash prizes!

11. Glass Case of Emotion: After the biker (Jack Black) punts Baxter off the bridge, Ron freaks out. While on the phone with Brian Fantana, Brian asks where Ron is located at the moment. Ron responds that he’s in “a class case of emotion,” aka, a phone booth. 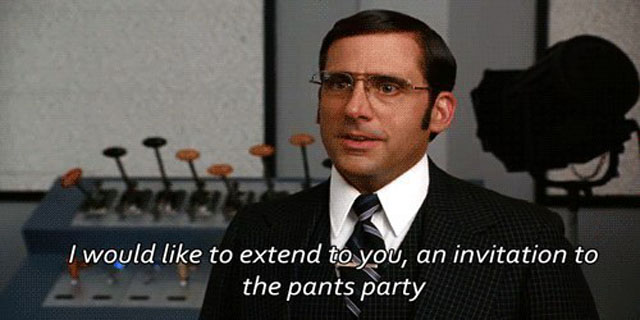 12. Pants Party: Ahhh, Brick. With all the men in the office trying to score with Veronica, the guys talk Brick into inviting her to “a party in his pants.” Brick being Brick, he butchered the line and instead, invited her to the “pants party.”

13. Two Tickets to the Gun Show: You’ve said it. I’ve said it. Your friends have said it. Easily a top three quote from the movie, Ron said he knew exactly how to get Ms. Corningstone to go out with him. Just give her “two tickets to the gun show.”

14. It’s the Pleats: After the gun show angle failed, Ron chased Veronica through the office to give it one last shot. Only problem is that during the conversation, Ron begins to sport a “massive erection” (Veronica’s words, not ours). Ron explains that “it’s the pleats” in his pants.

15. Baby Making Music: During their night on the town, Ron is asked to get up and perform jazz flute at the club where they’re having some cocktails. After a brief warm up, Ron starts to feel it and lets everyone know that what they’re hearing is “baby making music.”

16. I Love Lamp: Brick seems to love everything, but he really really loves lamp.

18. Dirty Whorish Mouth: After their relationship had gone south, Ron and Veronica begin to bicker all the time on set. One of Ron’s best zings is when he tells Veronica she has a “dirty whorish mouth.”

19. Killed a Guy with a Trident: When all the news teams in town get together for a brawl, Brick proves to be quite handy in a scrap. So handy, in fact, that he actually killed on of the guys with a trident!

20. Smelly Pirate Hooker: Yet another one of Ron’s pet names for Veronica after they broke up.

21. Great Odin’s Raven: To really get Ron, Veronica, knowing that Ron will read anything off the teleprompter, throws a line in there that gets Ron fired and turns the city against him. Ron fires off “Great Odin’s Raven” when he realizes he just signed off with “Go f–k yourself San Diego.”

22. Milk Was a Bad Choice: Ron, depressed and out of work, runs into the guys on the street. They’re not allowed to talk to him and it bums Ron out even more. On this hot summer day, he goes to take a swig of milk and this gem was uttered.

23. Sweet Eli Whitney’s Nose: Ron’s response to Veronica while she’s trying to admit she was the one who played the teleprompter trick on him.

24. 72% Sure that I love You: After making up, Veronica tells Ron that there are literally thousands of other men that she should be with, but she’s 72% sure that she loves him. We’d probably go with “72% Sure that I’m Winning/Losing” depending on your level of confidence in taking down your league.

25. You Stay Classy: The king of all lines in Anchorman. Ron’s signature sign off from each news broadcast.