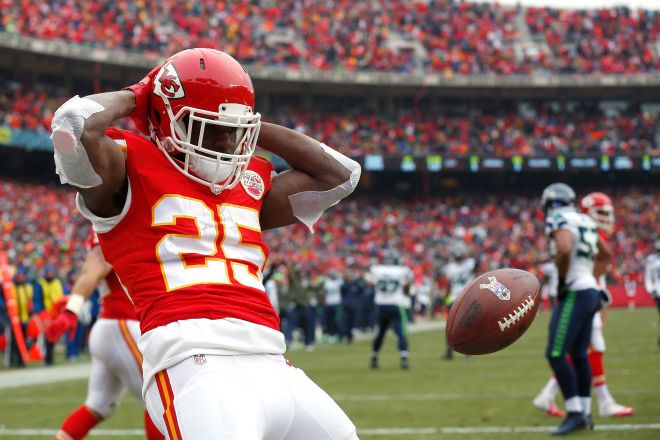 With another fun season of football upon us, we thought it would be fun to take a look back at some of the greatest fantasy football performances of all time. Undoubtedly, some these will stick out in the memory of anyone who was on the giving or receiving end of these epic stat lines. In many cases, these bonanzas single-handedly carried owners to victory or brought crushing defeat to a team that may have withstood even a merely excellent game by the player of note. Some of them also occurred before fantasy football made its way into our lives, making it fun to look back and see who the superstars would have been in leagues back in the 1960s.

Last time in this space, we looked back at the finest fantasy performances turned in by quarterbacks. Now, we’ll move from rock-tossing to rock-toting as we look back at the 10 gaudiest fantasy totals racked up by running backs and compare the incredible stats using FanDuel and DraftKings scoring.

For brevity’s sake, note that none of the players on this list fumbled during their historic performance.

Corey Dillon had a productive NFL career, rushing for more than 11,000 yards across 10 seasons. As far as single-game performances go, he’s probably best-known for setting at the time the NFL record with 278 yards against the Broncos in 2000. Fantasy owners, however, may more fondly recall a tilt against the Tennessee Oilers a few years before.

On the astroturf of Cinergy Field, Dillon put in the ultimate workhorse effort, toting the rock 39 times – this was before tandem backfields were in vogue – for 246 yards and four touchdowns. That’s the most carries by any back to make this list. Dillon added 30 yards on two catches as the Bengals trucked the favored Oilers 41-14.

The first old-timer to make the list, Cookie Gilchrist is a reminder that there was once a time when fullbacks not only took the field on nearly every play, but were important ball-carriers in team’s running games. Gilchrist produced more on the ground in one day than many modern fullbacks do in their entire careers.

The North Texas product, who stood 6-foot-3 and tipped the scales at a monstrous 251 pounds – comparable to some linemen in that day – suited up for the Buffalo Bills and punished the visiting New York Jets to the tune of 243 yards and five touchdowns on 36 carries. The Bills won going away, 45-14. Haynes’ total was enough to break the single-game rushing record, held by Jim Brown at the time. The mark would stand until Willie Ellison ran for 246 in a game in 1971.

The memory of one exemplary game can linger in the minds of fantasy owners. What Doug Martin did against the Oakland Raiders in 2012 serves as ample evidence of that. Yes, he tallied more than 1,400 rushing yards for the Tampa Bay Bucs that year, but without this game, it’s very possible he would not have been a consensus top-five pick the next year who has done naught but disappoint ever since.

The rookie out of Boise State ran absolutely wild against the porous Raiders, tallying the most rushing yardage on this list with 251 despite carrying just 25 times. He burned the Raiders on long touchdown runs of 45, 67, and then 70 yards. Martin’s weak receiving total of 4 catches for just 21 yards holds him to the back end of this list, but his rampage was enough to send the Raiders into a tailspin as the 42-32 beating was the first of six straight losses for a team that finished 4-12.

Back before Cleveland sports were totally and utterly futile, there was Jim Brown. The future Hall of Famer set the bar for running backs for years to come, and maybe his greatest effort came on a 35-degree day in mid-November against the Philadelphia Eagles.

Things started slowly with just an Eagles field goal in the first quarter, but then Brown got the scoring going with two touchdowns in the second. He added two more scores in the fourth in what looks to have been a consistent, grinding effort as all of his scores were under 10 yards out. He racked up 237 yards on 34 carries and had another 52 yards receiving on three catches as the Browns won 45-24.

The week after Jim Brown destroyed the Eagles in 1961, Abner Haynes one-upped him with an even more lucrative line. In fact, 1961 was a remarkable year for single-game rushing performances, as still one more remains further down this list – we’ll get to that one in a minute. First, let’s look at what Haynes did in the Cotton Bowl as a member of the Dallas Texans against the visiting Raiders.

In his day, Haynes was known as one of the most versatile players in the game, a danger to the opposition running, passing, and returning kicks. In his career, Haynes had nearly as many receiving yards as rushing, making him a sort of harbinger of the pass-catching running backs we see today. He put those skills on display against the lowly Raiders, rushing 14 times for 158 yards and four touchdowns and adding 84 yards receiving on two catches for another touchdown. The Texans look to have taken their collective foot off the gas after Haynes’ fifth score made it 43-3, as the only fourth-quarter score was a Raiders garbage touchdown and two-point conversion to make it a 43-11 loss.

Veteran fantasy owners remember Shaun Alexander well, as he had a five-year stretch of being one of the most productive backs in the league and was a fixture in the first round of almost any draft. The Alabama product’s coming out party was 2001, and he silenced any lingering doubts about his sustainability when Minnesota came to Seattle in Week 4.

Alexander got on the board early with two first-quarter touchdowns, but he and the Seahawks went completely bananas in the dying minutes of the second. Up 17-10 with just over three minutes left, Alexander took a pass 80 yards to the house. Then, after a fumbled kickoff, Alexander scored his fourth touchdown. Amazingly, the ensuing kickoff was fumbled again, and Alexander scored on a 14-yard run the next play. The Vikings’ next drive ended in an interception for yet another touchdown to make it 45-10 and the game was basically over, so Alexander didn’t add much more and it ended 48-23.

The Kansas City Chiefs under coach Dick Vermeil in 2003 rode a high-scoring offense to a 13-3 record and a first-round playoff bye. The team did have a major weakness though, an abysmal run defense that gave up a league-worst 5.2 yards-per-rush. Never was that weakness more apparent than Week 14 against Clinton Portis and the Broncos.

The game was competitive enough for two-and-a-half quarters, with the Broncos leading 24-21. Portis, who had already rushed for two touchdowns, put things on ice at that point with touchdown romps of 59 yards, 28 yards, and 53 yards. The Chiefs would save a little face with a garbage time touchdown to lose 45-27, but when the dust had settled, the former Miami Hurricanes star had racked up 218 yards on the ground and another 36 on two catches. He checked out of the game with about eight minutes still remaining, though even eight more minutes might not have been enough to catch the top guy on this list.

One of two Hall of Famers on this list, Gale Sayers enjoyed a brief but spectacular career playing for the Chicago Bears as well as arguably one of the greatest nicknames in the history of the sport, “The Kansas Comet.” The former Jayhawk was known for his prowess both running and returning, and both skills were on display on display against the San Francisco 49ers on an unseasonably warm day of 54 degrees in December 1965.

Sayers carried the ball just nine times but four of those went for touchdowns as he ran for 113 yards, giving him 12.56 per rush, the best on this list. His penchant for the big play didn’t stop there though, as he went for 89 yards and another touchdown on just a pair of catches. With his team leading 47-20, Sayers tacked on one more score, returning a Tommy Davis punt 85 yards to pay dirt in the fourth quarter. Sayers’ backup added one more score as the Bears won 61-20.

After Doug Martin obliterated the Raiders in 2012, they made clear efforts to shore up the run defense, which paid dividends in an improvement to 3.9 yards-per-rush allowed, 11th best in the league. Unfortunately for the men in silver and black, Kansas City’s Jamaal Charles is also a very adept pass catcher.

This is the most unusual entry on this list, as Charles rushed for a paltry 20 yards on eight carries. The Raiders may have been well-prepared for the Chiefs’ prolific running game, but they seemed to completely forget how to defend a screen pass. Charles torched the Raiders for an unthinkable 195 yards on just eight catches, going for four touchdowns. He got things cooking immediately with a 49-yard score just 20 seconds into the game and later added scores of 39 yards, 16 yards, and 71 yards, as well as a one-yard plunge on the ground. The Chiefs rolled 56-31, and the scary thing is Charles could have had significantly more, as backup Knile Davis had nine rushes in the fourth for 34 yards and a score of his own.

The last of the three 1961 games on the list was the most prolific of all. College football legend and Heisman Trophy winner Billy Cannon went first in the draft in both the NFL and AFL, ultimately signing with the Houston Oilers of the AFL. In his second season, the Oilers met the New York Titans – the franchise would later be rechristened the Jets – on the penultimate week of the season, and Cannon put on a show for the ages.

With the wind chill below freezing on the legendary Polo Grounds, Cannon set the tone early with a 67-yard touchdown grab from Hall of Fame QB George Blanda. Cannon then caught another TD in the second quarter but apparently got bored with that. He switched to torturing the Titans via the run, ripping off 61-yard and 52-yard scores in the second half before punctuating the 48-21 victory with a two-yard plunge, his fifth touchdown of the day. When his work was finished, Cannon had amassed 330 yards from scrimmage and put together a fantasy masterpiece that nobody has been able to touch in more than 50 years since.