We are one week closer to the start of the 2013/14 NFL season, and unlike last week where all we had to base our predictions on was pure speculation (and the odd insider tip from the New England Police Department), we actually got some NFL football this week.

There are still 24 days until meaningful snaps are taken, and sadly, while the action this week looked like football, and sounded like football, it was still only preseason. Did you see enough from the two snaps Christian Ponder took to make you believe in the Vikings offence this year? Did Danny Amendola silence his critics and look right at home in the Patriots scheme? Did any player stand out enough to justify being your first round draft pick?

But there was still plenty of information to glean from this past week of marginally pointless exhibition, so I’ve catalogued all that I collected into the following list.

1. It’s been so long without football, even a Browns/Rams preseason game gets me excited.

2. Patriots QB Tim Tebow will find just as much success in New England as he did in New York.

3. Jets QB Mark Sanchez threw a pick six on his first drive, so he is already in regular season form.

4. Bears QB Jay Cutler was not to be outdone, throwing an interception on his first play. It was not returned for a touchdown, so he has a bit more work to do until he’s ready for the regular season.

5. Giants WR Victor Cruz might just be the most draft worthy WR this season.

6. Ravens QB Joe Flacco is overpaid (Note: This opinion will not change for the duration of the season unless he wins the Super Bowl again…and leads the Orioles to the World Series somehow)

7. The Arizona Cardinals are well on their way to an undefeated preseason, which will pave the way for a magical 5-11 season.

8. No rookie QB will have the breakout year that Cam Newton and Robert Griffin III have enjoyed the past two seasons, although Bills rookie pivot E.J. Manuel will get the required playing time.

10. Even in preseason, four downs are still better than three. Sorry CFL.

11. Chiefs QB Alex Smith was better in one preseason drive than Matt Cassel was for his entire tenure in Kansas City.

12. By the third quarter, I’ve seen all I need to see. Fantasy gods help me if I need any players I see during the fourth quarter of a preseason game.

14. There are at least 8 DST’s I would draft before the Pittsburgh Steelers.

15. Rookie Jets QB Geno Smith suffered an ankle injury, bypassing Robert Griffin III’s impressive debut season and skipping straight to the leg injury that ended it. He is efficient, I’ll give him that.

16. The Kansas City Chiefs will do great as a team, but mediocre as individuals. Fantasy owners beware. 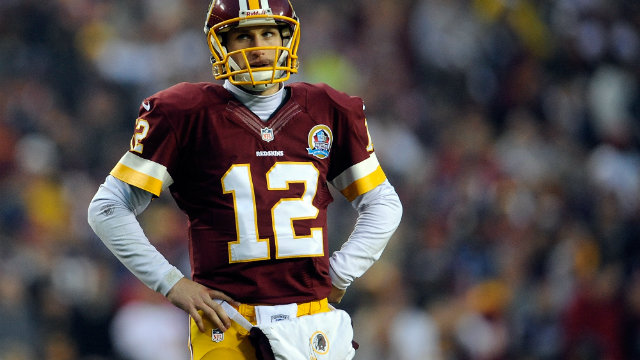 17. Redskins QB Kirk Cousins is one of the most valuable QB handcuffs in the league. If RGIII didn’t include “sliding to avoid contact” into his offseason workout regimen, Cousins could be worth his weight in waiver budget dollars.

18. Rookie Colts backup QB Chandler Harnish might just have my favorite name of the 2013 rookie class…except for maybe Kenjon Barner… or Giovani Bernard…or–

19. Controversial Chargers LB Manti Te’o had no tackles in his NFL debut. You could say that “on the field, he was as invisible as his girlfriend”, but that is an easy joke.

20. I am not above making the easy joke.

21. The Buffalo Bills offense is deceptively loaded with weapons. Rookie WR Robert Woods might just be the best rookie sleeper this season.

22. Seahawks QB Tarvaris Jackson played a solid preseason game and once again proved beyond all doubt that he has what it takes to be a back-up NFL quarterback.

23. The competition for the Philadelphia Eagles starting QB job between Michael Vick and Nick Foles will be intense, but I will want nothing to do with either of them come draft day.

24. No matter which team you are a fan of, there is no reason to panic. (Except for Jacksonville Jaguars fans. All seven of you should start looking forward to the draft.)

The regular season is inching closer and closer with each passing day. And even though we’ve got to wade through three more weeks of watching future CFL all-stars take snaps, come kickoff on September 5th, it will all be worth it.