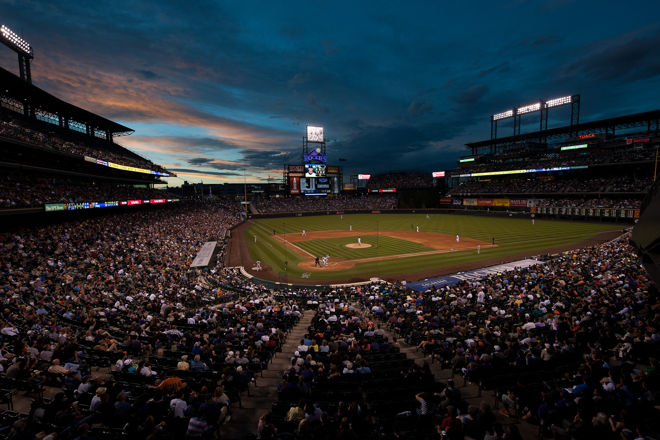 One of the key factors that should play into any decision you make in fantasy baseball — be it season-long or daily — is the stadium in which a game is played. Depending on the venue, batter and pitcher values can fluctuate wildly.

For example, the high altitude and resulting thin, dry air at Coors Field in Colorado famously causes balls to fly out of the stadium, making even the best pitchers a dicey proposition and even the most mediocre hitters viable options. Meanwhile, in Yankee Stadium, offense is also prevalent but for a different reason. The fences in both left and right field are scrunched in at 318 feet and 314 feet, respectively, making them easy to clear for power hitters.

On the other hand, pitchers thrive at San Francisco’s AT&T Park, with its expansive outfield of 339 feet in left and 399 feet in center, along with a 25-foot wall to clear in the shorter right field.

In this two-part series, we’ll examine the top five stadiums for first hitters and then pitchers, and provide a complete ranking of every stadium. The park factor data is pulled from 2013-2015 at FanGraphs, and park dimension information comes from swishanalytics.com. Ties are broken by home run factor, and the plus or minus indicates how much scoring is increased or decreased at the stadium relative to MLB average.

No park on either side of the ledger is even in the same stratosphere as Coors Field in terms of distance from the rest of the pack. While even the easiest and toughest parks to hit in are generally somewhere in the neighborhood of 10 percent above or below the league average, Coors is at a whopping 33 percent.

There are a variety of factors contributing to Coors being MLB’s premier launching pad. Foremost is the elevation. Located about a mile above sea level, the thinner air in Denver makes it easier for balls to travel farther. Furthermore, the air is also very dry; a humidor has been in use for quite a few years now that has mitigated some of the effects of the dry air, but home runs still occur 32 percent more often than league average. The lack of moisture also reduces the amount of movement on breaking pitches, and flatter breaking pitches are easier for hitters to square up on.

Designers of Coors Field, which opened in 1995, knew full well that home runs would be prevalent and tried to compensate with one of the most expansive outfields in baseball. The dimensions of the park are massive — it’s about 350 feet down both foul lines with a decent-sized 14-foot wall in right. That’s made Coors a haven for not just bombs, but doubles and triples as well. Only Fenway allows more doubles, and no venue has more three-baggers.

Add it all up, and Coors is in a class of its own as a hitters’ park.

The Rangers’ ballpark was built in 1994 and has a well-founded reputation as a hitters’ park, boosting offense by 12 percent. That may not sound like a ton, but it’s well clear of a cluster of teams tied for third.

Home runs in the park are surprisingly only boosted by 12 percent, which is behind a good deal of other stadiums. That’s very likely a function of the outfield wall in left field. The majority of batters are right-handed, and while the distance out to left is a relatively standard 332 feet, there’s a 16-foot wall over there that turns many would-be bombs into doubles and triples. Sure enough, the park ranks ninth in doubles factor and seventh in triples factor. Lefties, on the other hand, see a big 18 percent boost in homer ability due to a shorter distance of 325 feet and a shorter wall of eight feet.

One big thing hitters have going for them is that Texas sees longer and hotter summers than almost anywhere else in the nation. Hot air is less dense, so balls fly farther, and the dog days of summer are miserable on pitchers at Global Life Park. The foul territory is also very small, especially in the outfield, helping hitters avoid easy foul outs.

“The Cell” doesn’t have quite reputation of the two stadiums listed above, but it has nonetheless been kind to hitters since replacing famed Comiskey Park in 1991.

Right-handed batters especially love playing at The Cell, as their home run hitting abilities are boosted by 28 percent compared to 12 percent for their lefty counterparts. That’s the primary driver of the park’s offense bump, as its actually below average in terms of doubles and triples.

At first glance, the park looks pretty symmetrical but a few subtle factors add up to help right-handed sluggers. First off, the entire wall is a mere eight feet high, which enables many hits that would carom off the wall in other venues to clear the fence. Second, the left-field fence curves very gradually from the 330 feet out to the pole to the 400 feet in center, while right-field fence starts off a little farther out at 335 feet and has a slight but noticeably sharper angle out to center that lengthens the distance in the power alley. Finally, the stands are pretty scrunched next to the field, leaving less foul territory than at many other stadiums.

So, while The Cell is good for hitters in general, right-handed home run hitters are the big beneficiaries.

Chase Field, a retractable roof stadium, opened in 1998 for the expansion Diamondbacks. It has very interesting dimensions that make it unique but fruitful environment for hitting.

Chase boosts home runs by a mere eight percent and it’s slightly better for right-handed batters than left, probably owing to the five feet of extra distance down the right-field line. What’s really interesting is how important it is to hammer the ball down the lines for players looking to touch ’em all. Though the wall stands less than eight feet high around most of the outfield, making for a generous clearance for hitters, it spikes to a whopping 25 feet in a center field that squares off at 407 feet. What that equates to is doubles and triples for days — the park ranks fourth for doubles and third for triples.

Hot temperatures and the second-highest altitude of any MLB stadium also aid the bats. It typically gets even hotter in Phoenix than Arlington, and hot, thin air is a sure recipe for balls to sail. Summer time in Arizona makes for a pitcher’s nightmare.

The oldest park in baseball by just a few years over Wrigley Field — it opened in 1912 — Fenway is probably the quirkiest venue in the MLB.

The famed left-field wall dubbed “The Green Monster” is the primary driver of offense at Fenway. The wall is more than 37 feet high, and along with a deep right field, it makes home runs relatively tough to come by overall at Fenway. Right-handers get a boost of just four percent while lefties see a steep drop of 20 percent. Since the Monster is only 310 feet down the line and veers slowly to center, however, doubles occur far more often than any other park.

The story is different altogether for lefties. The 302-foot right-field pole, dubbed “Pesky’s Pole” after former Red Sox player Johnny Pesky, might look like an attractive target at first glance since it’s the shortest outfield distance in baseball and the fence is just a few feet high. However, it’s fool’s gold as the wall curves very sharply out and makes for a rather spacious right field. There’s also a bit of a spike known as “The Triangle” just to the right of dead center that pushes the distance to about 420 feet. That area is likely the primary reason behind Fenway being a slightly above average park for triples as it’s both far and creates tricky bounces.